Gucci’s high horology has it stand out from the crowd 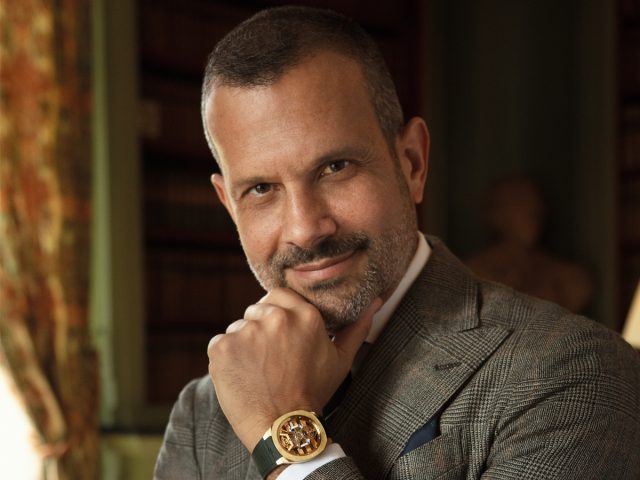 Gucci’s watch offering has gone from strength to strength in recent years under the stewardship of Maurizio Pisanu, the brand’s Managing Director of Watches and Jewellery. Mr Pisanu started his career working for Deutche Bank as a Business Analyst before quickly finding himself in the high-end fashion industry.

Holding positions at Bulgari, Tiffany & Co and Louis Vuitton in their respective watch departments, he eventually joined Gucci in 2016 as Global Director for Licensing Watches, Jewellery, High Jewellery and Accessories, before being promoted to his current role in 2020.

In that time, we’ve seen Gucci continue on its watchmaking journey and execute it to perfection. It chose last year, its 100th anniversary year, to launch what it called a high watchmaking collection including pieces using an in-house developed calibre for the first time.

The GG727.25 watch calibre is produced by Gucci’s parent company Kering’s movement manufacture in La Chaux-de-Fonds, Switzerland. It is a slim automatic movement, just 3.70mm high, and made its debut in the GUCCI 25H collection, which has models in steel or gold and, at the top of the range, pieces with a tourbillon at 6 o’clock.

At the time, Mr Pisanu explained: “Like all of our timepieces, the high watchmaking collection is made in Switzerland and assembled entirely in-house. Each one of these outstanding mechanical watches combines horological engineering with rare decorative arts and signature Gucci details.”

Gucci’s design and pricing pitches the watches into the heart of the luxury sports watch market where it will need to appeal to customers who might otherwise purchase an Omega, Rolex, Breitling or Grand Seiko.

Then, earlier this year, signs of the appeal of Gucci watches continued to make the news, with Gucci officially opening a boutique in partnership with Lunn’s Jewellers in the Queen’s Arcade in Belfast, among other decisions on strategy becoming noteworthy for all of the right reasons.

We all know how powerful a well-executed marketing plan is in today’s age too. Brand alignment and adjacencies are all mightily important, another tick in the right box for Gucci. Getting Idris Elba on-board seemed a major coup for the wider Gucci offering, but none moreso than for its watch department.

It has since capitalized on that further, having Jessica Chastain come on-board for this year’s GUCCI 25H campaign. In the film and series of endorsed and still-life images, retro aesthetics and a modern execution dovetail together to celebrate the unique design of the watch collection.

As in the campaign’s earlier incarnation, released in May with actor, producer and musician Idris Elba, Chastain takes on the role of an empowered ‘screen idol’ character, just like Elba.

By elevating this with understated hints of irony and a vivid, photographic execution, the campaign has an expressive duality that feels unexpected and decisively Gucci. Defined by its multi-layered, ultra-thin silhouette, the GUCCI 25H takes its inspiration from sleek architecture, simultaneously evoking the House’s watch expertise and contemporary narrative.

From the sharp lines and integrated bracelet, crown and bezel to subtle details like the contrasting finishes, the GUCCI 25H is a milestone in Gucci’s 50-year watchmaking journey. Three automatic editions of the watch feature in the campaign, all fitted with the House’s GG727.25 caliber.

Alongside the 40mm steel and diamonds model, which Chastain wears in the film and one of the endorsed shots, are its monochromatic counterparts in blue and pink aluminum, featured in the still-life and endorsed shots respectively.

All of the aforementioned has really allowed Gucci to set itself aside from other fashion houses in the watch business.

On how this looks moving forward, Mr Pisanu told WATCHPRO: “We’ll continue this direction. Of course, we wanted to continue to grow and be more in this segment,” reflecting specifically on high watchmaking.

He continued: “We had huge requests from customers for something at the top level and we realized around three years ago, when we started thinking about this segment more closely, that actually we have everything to execute it really well. We have the people, we have the know-how, we have the design and we have the brand, so we could and should do it.

“After the launch of the high jewellery collection that started the one year before in 2019, we also realized we needed to consolidate more in what we call the core segment of our watches. So there is a focus on that, as well as having a very exclusive message when it comes to the higher end offering. So yes, the answer is we will continue to give this direction a lot of our attention, but at the same time, we will continue to consolidate the more core segments of the watch offer.”

In order to achieve just that, Mr Pisanu went on to discuss just how exactly the modern retail landscape looks when it comes to e-commerce, bricks and mortar stores as well as the growing importance of hospitality and creating a true experience for consumers, especially those consumers spending in the high-end.

On the balance between e-commerce and bricks and mortar, he detailed: “I think both at the same time. I think that for these kinds of products, you have to come back in a kind of traditional way, while staying up-to-date with the ever-changing situation. What I can tell you is that it has always been important in luxury, and continues to be that the experience is key.

“I think we are moving away from a transactional situations to one where the experience is key and the transaction is secondary. That’s why when the big Swiss events happen we are keen to bring people off-site and to a different location, to really immerse them into the world of Gucci.”

For a brand like Gucci, positioning itself in the luxury watch segment is something it should be proud to have done. It is an achievement worth noting, and one that has been done with what looks like ease from the outside.

Challenges in making a move like this can be hard to overcome, with retailers themselves often explaining how the big brands completely dominate due to the big groups which own them, as well as the consumer appetite. It often leaves retailers with nowhere else to go, apart from to jump through certain hoops.

WATCHPRO is sure it was not easy for Gucci to take on these hurdles, while from an outsider’s perspective, it looks like they have done so with complete and utter success.

Pisanu continued: “I think we’ve had to evolve in the high end segment. We have always been into watches at Gucci, but more at a commercial level and we were perceived in the past as a fashion brand, more than a luxury brand; and I don’t like to talk with the fashion brand term. I prefer the word luxury.

“We were perceived really as more a commercial brand, which is okay, because we can do lots of watches and we could have stuck to that and being perfectly fine to continue on that path.

“However, a time came where a huge portion of our customer base had an appetite for the higher-end, something which we wanted to react to and therefore elevate our timepiece offering. That said, it is important to remember it is not a shift, because it is completely different, we had to become more qualitative and it was more of a change in strategy and a move to high-end rather than a complete shift in what we do. 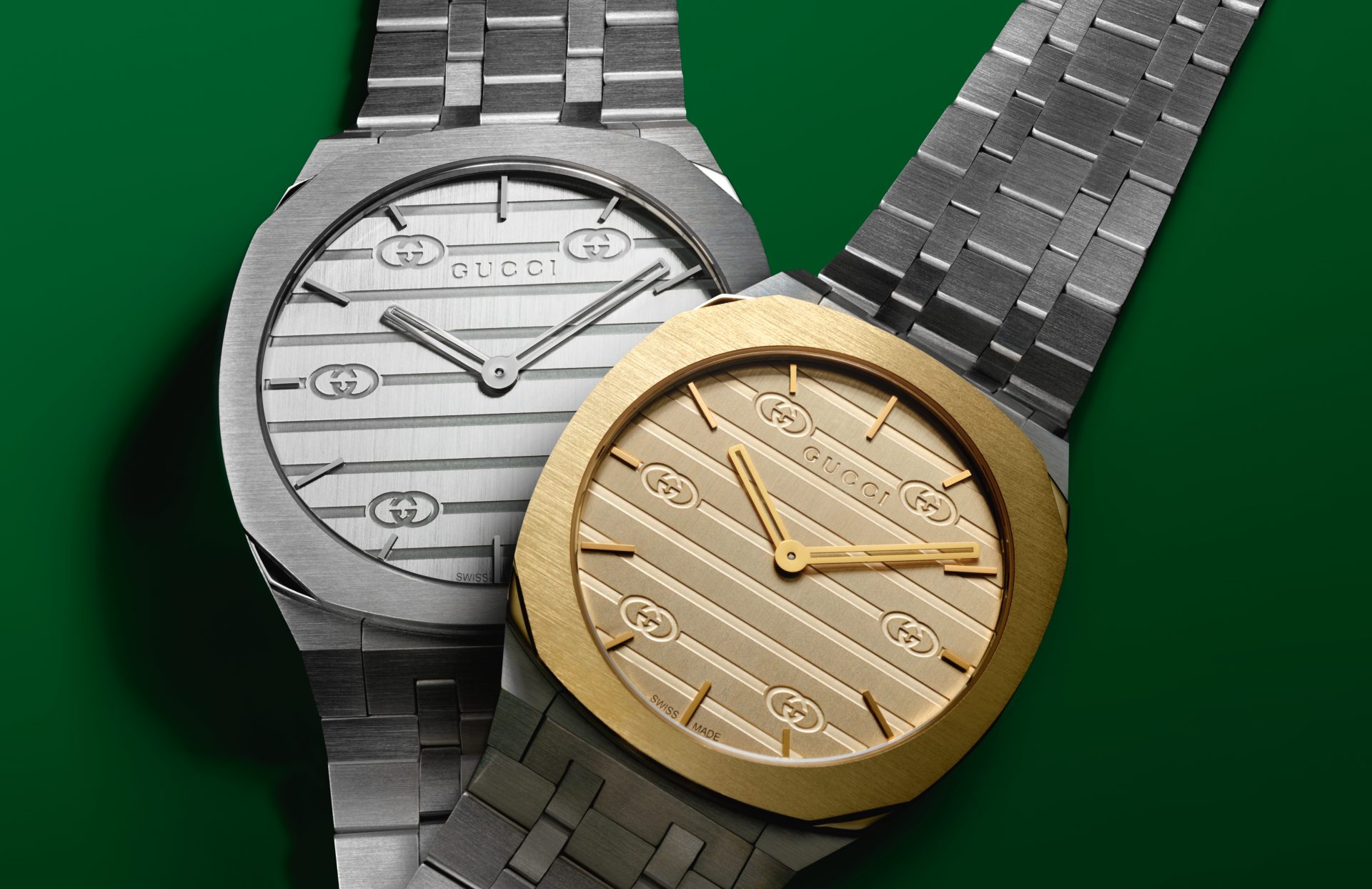 “We did so because the goal was to achieve an objective of listening to that Gucci audience, which was growing too. In doing so, we have also seen how the high-end work is helping the commercial work and that is because, of course, we now have a much broader appeal. On the other hand, the hardest part is helping the perception of the brand in the more commercial segment.”

In terms of watchmaking though, it has been key for the design team to be able to design a watch for the watches sake, rather than trying to appease a demographic. One should, and should is the key word, lead to another.

Mr Pisanu explained: “I think this is the future because this segment is a huge opportunity for us and will become part of the brand. Even when we started on jewellery like three, four years ago, we didn’t expect that it was going to be such a success, while today, everyone is looking for that part of the business. If we were starting today without that it would be even more difficult, but we now have that knowledge and have the intuition of how to deliver it in a watchmaking sense. It now all seems completely natural to us here.”

Usually with an elevation, new markets can perform better than others and a brand’s traditional audience can sometimes be left behind.

With what Gucci has done though, that is not the case at all. The growth has opened up more emerging markets, while traditional markets have also remained interested in what the brand has to offer.

In explaining just how it has managed to achieve so, being true to the brand identity and not desperately trying to cater to a specific market has been key.

On this issue specifically, Pisanu concluded: “To be honest, I’ve not seen much in the way of new markets as such, but moreso emerging markets like Asia that are performing even better than before while on the other hand, some of our very traditional markets are permorning even better than before so we remain confident that we can continue to execute and achieve our objectives and goals in this segment.

Traditional markets like Europe are either consolidating their interest in our category or it is growing further, so I haven’t seen a specific trend or situation in the market.

“It does seem though that everything we have here in the high end is appealing to emerging and existing markets because while we are not catering directly to them, we are seeing a younger generation come on board with the brand which is really encouraging to what we are doing. I think it ultimately makes sense because of the design element of what we do. That said, the more mature customer across the Gucci brand has also responded well to our brand and the watch offering and I think that is mainly due to our fantastic design team.”