Swiss heritage watchmaker MIDO could be one of the nation’s best-kept secrets. Despite offering exceptional bang-for-buck, it seems like appreciation of the brand is limited to the aficionados who make it their mission to unearth the best Swiss watches. MIDO’s Ocean Star is an excellent introduction to the brand, with the titanium version punching well above its weight. Like earlier iterations, this robust diver’s watch is a no-nonsense piece that is as comfortable in the office as it is in the sea.

You’ll also like: SOLD: $435,000 MIDO Worn By Mr. Bugatti Himself Tudor Revives a Favourite: The Iconic Ranger is Back Breitling’s New SuperOcean Brings Vintage Charm to the Beach and Boardroom 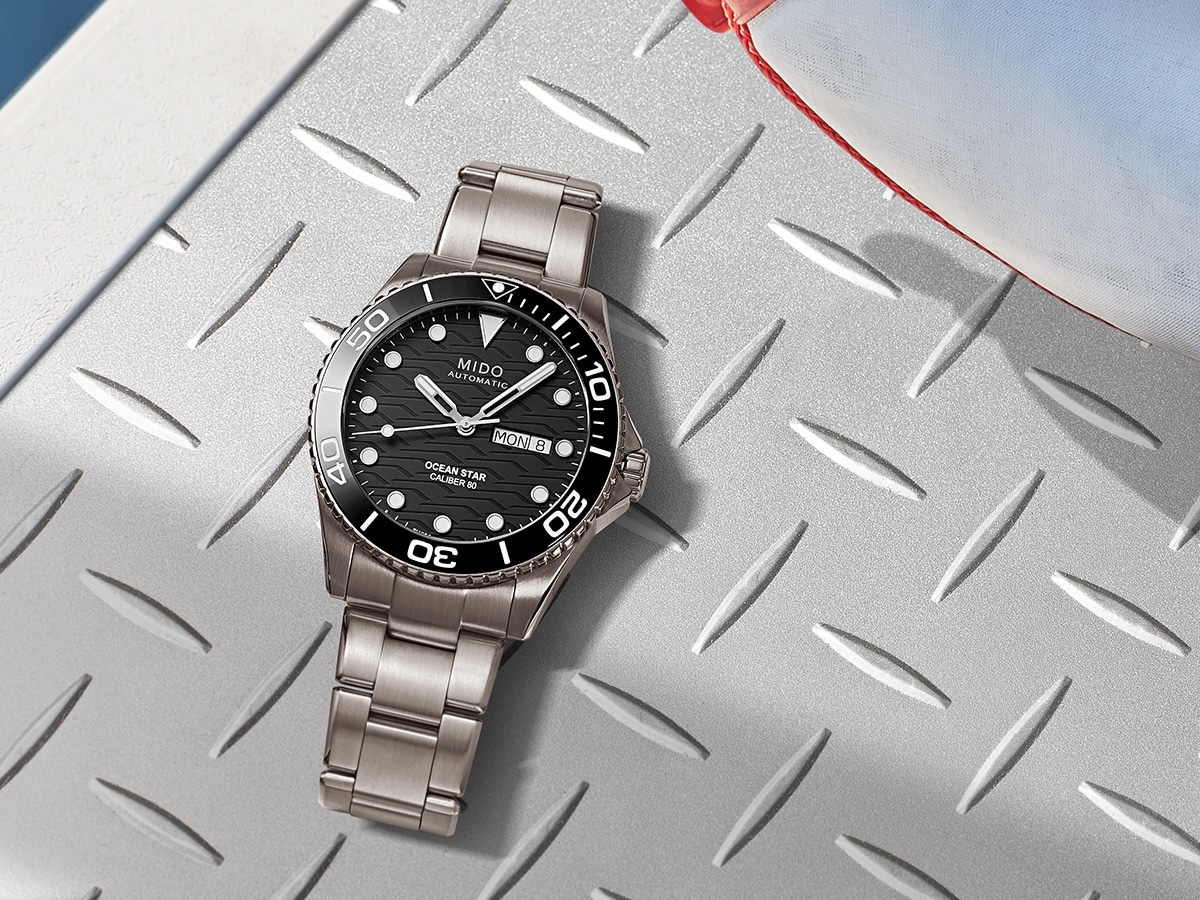 Despite more than one hundred years of history it’s easy to overlook MIDO. As part of the Swatch group, it’s largely overshadowed by some of its more famous sister brands – companies like Omega, Glashütte Original, Rado and Longines, but with the release of the latest titanium Ocean Star, the underdog has come out snarling. Can this affordable Swiss automatic watch really put up a fight against its more expensive rivals? Let’s be clear, not all Swiss-made automatic watches need to break the bank. Much like Certina, Tissot and Hamiton, it’s the first step on the ladder of top-quality Swiss watchmaking.

The Ocean Star line is renowned for its understated technical appearance and superb attention to detail and traces its lineage to the ’50s. The first Ocean Star was launched alongside other exceptional dive watches of the day, including Rolex’s Submariner and Blancpain’s Fifty Fathoms. The brand describes the watch as inspiring a desire for sea adventure and if you’re familiar with the brand’s history, you’ll appreciate the development that this line represented. MIDO had originally been created as a watchmaking homage to architecture, with the Art Deco movement heavily influencing its designs. It’s that early inspiration that gives the Ocean Star 200C its tasteful and spartan appearance. Rather than forging the case from stainless steel, MIDO has opted for a satin-finished titanium case. Titanium is both lighter and stronger than steel and the dulled appearance reinforces the tool watch vibe. At 42.5mm wide it’s mid-sized and versatile.

The dial continues the sober appearance, being matt black. The ripple or wave effect pattern is distinctive, but not overwhelming, and the indexes and date window are typical of a dive watch. The only flair comes from the diamond-cut hands. 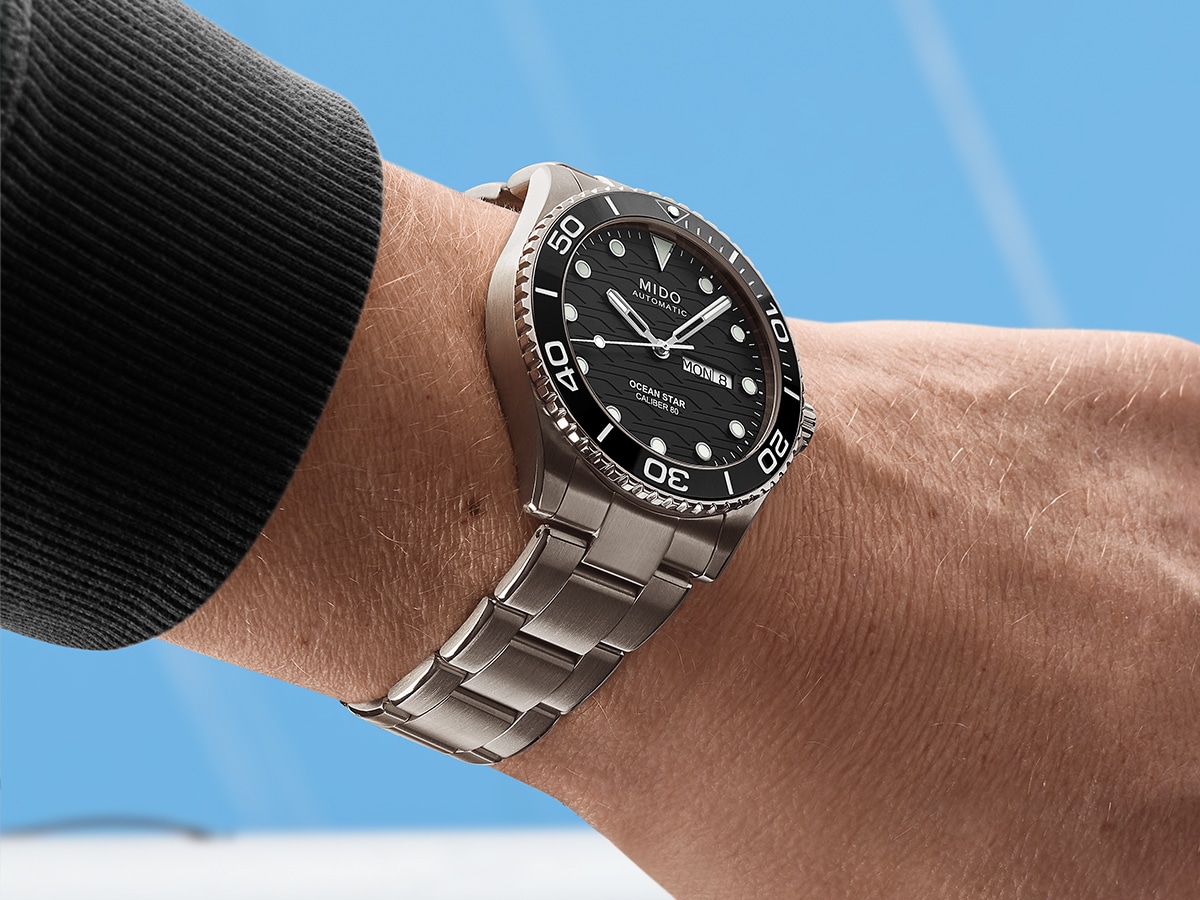 To earn those two important words – Swiss Made – the Ocean Star must house a Swiss movement. In this case, it’s powered by MIDO’s own Calibre 80 automatic movement – a reliable engine built from an ETA base. Along with the impressive ceramic bezel, sapphire crystal and 200M of water resistance, this makes for a very desirable watch. Remember, it’s priced at less than 2000 bucks.

You don’t see MIDO’s name on the side of F1 cars or timing Olympic events – but don’t let that fool you into thinking that MIDO doesn’t stand alongside more widely-known Swiss brands. The Ocean Star 200C Titanium holds its own in esteemed company. It’s an obvious contender if value for money is a deciding factor when shopping for a Swiss-made diver’s watch. 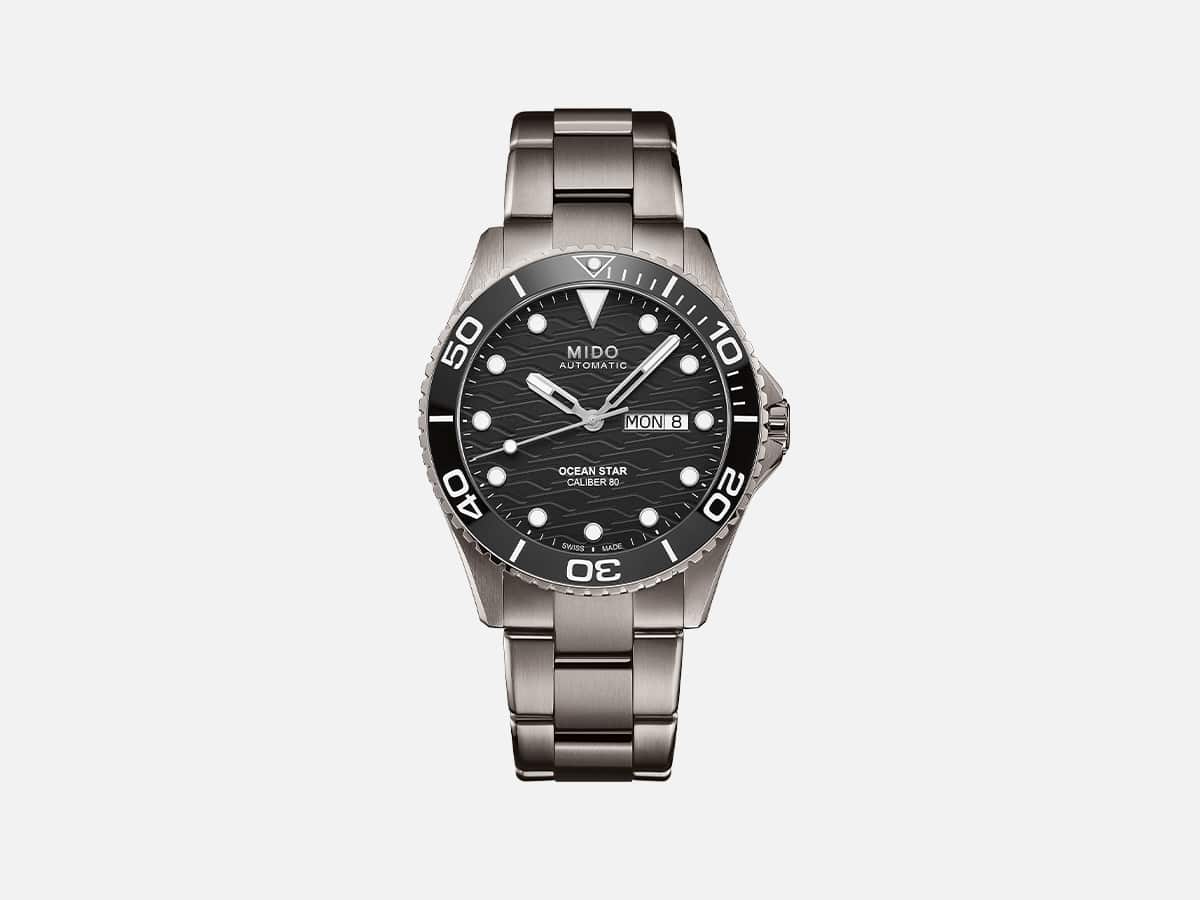 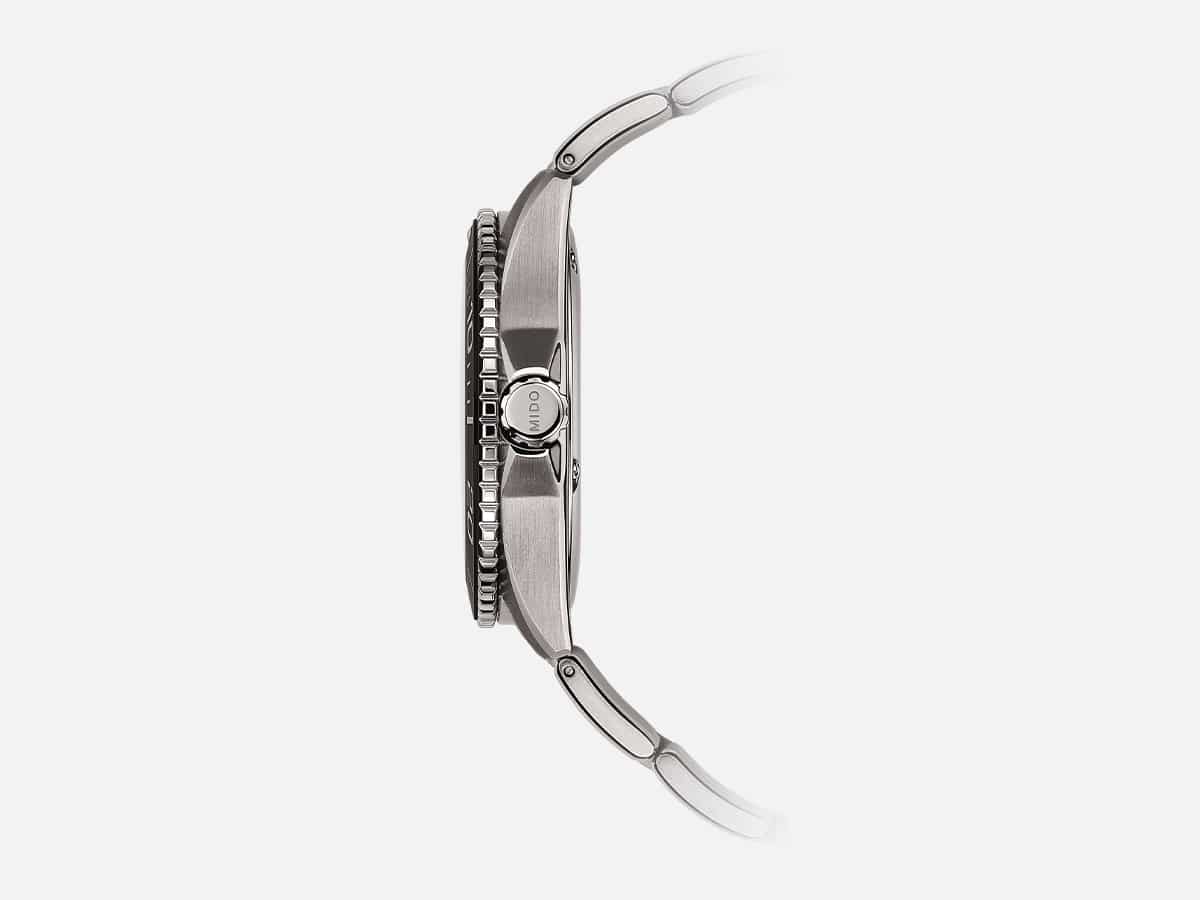 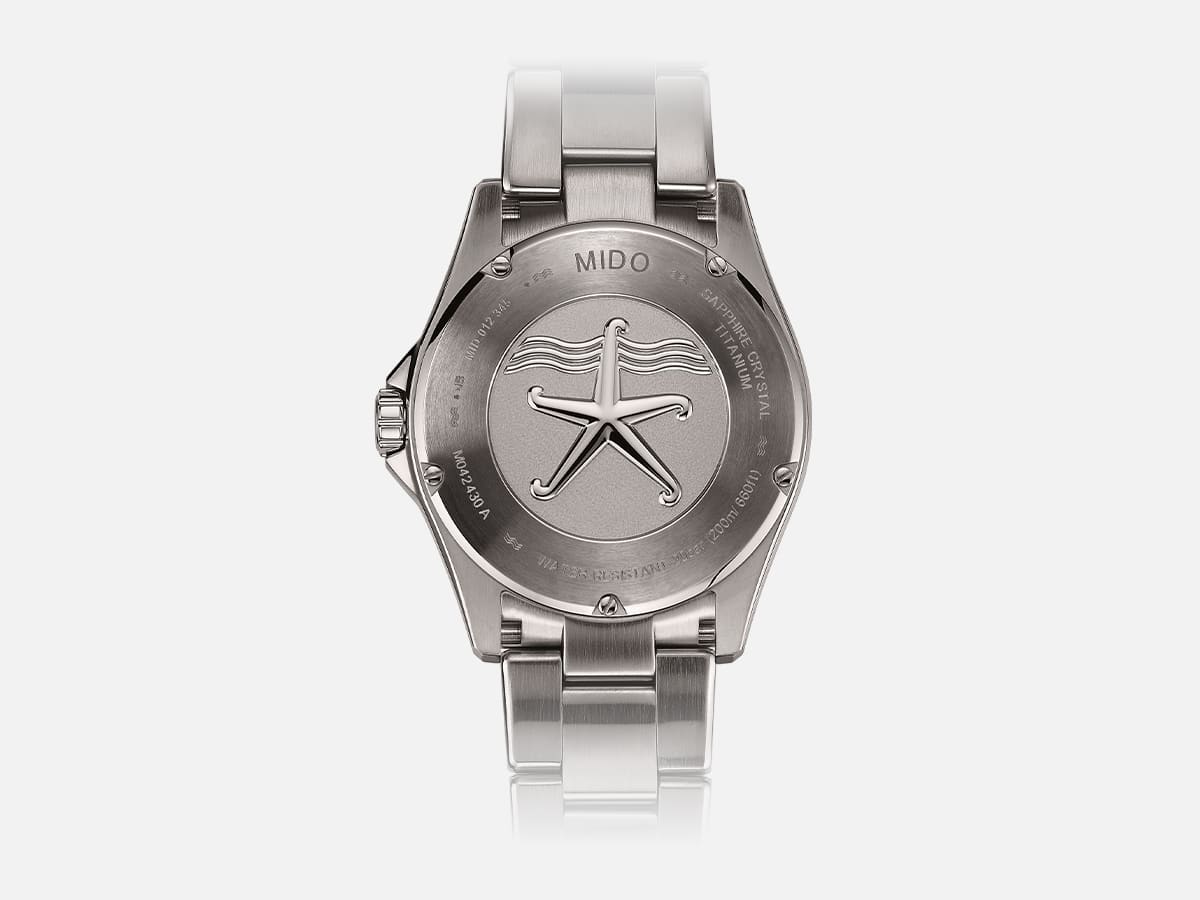