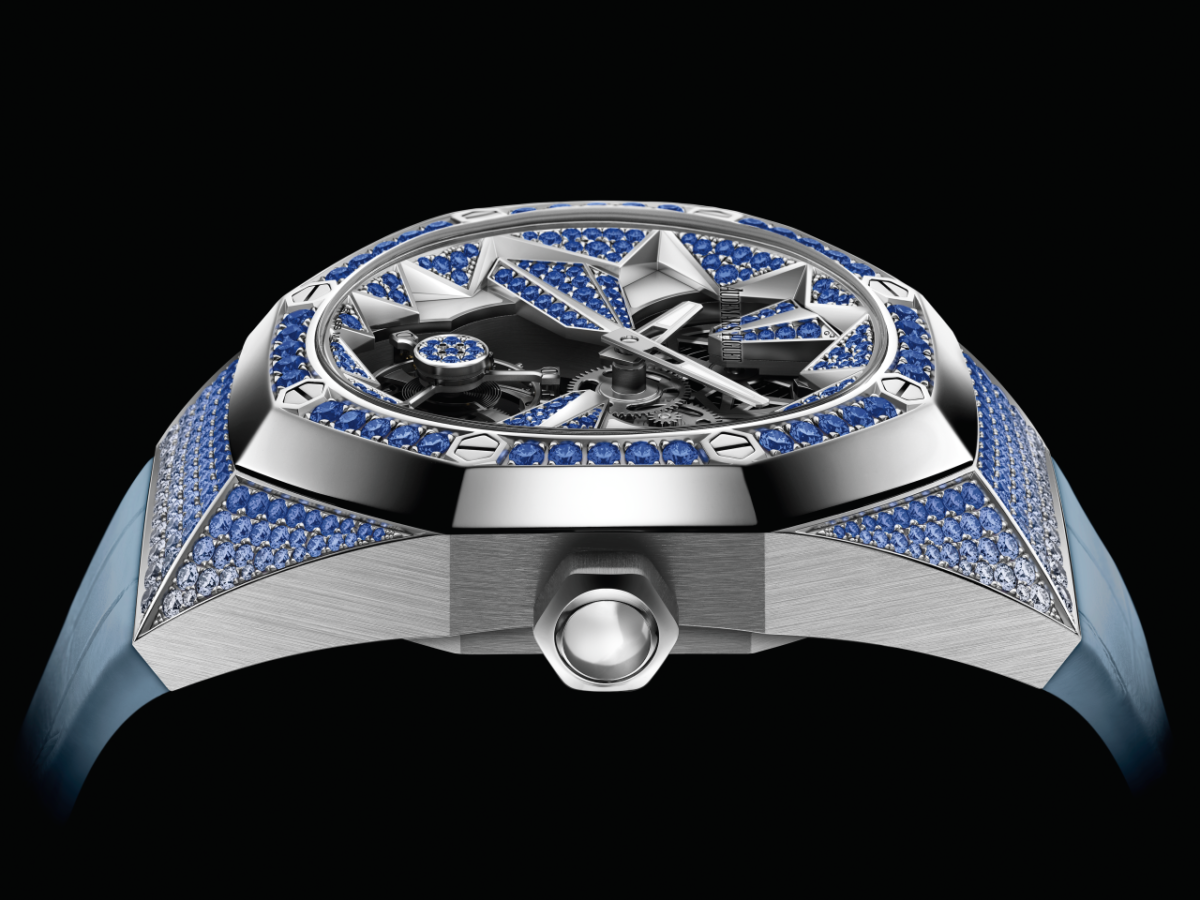 The Manufacture has designed an array of pioneering mechanical watches – for both men and women – since its establishment back in 1875. Ranging from timeless classics to avant-garde creations, they include a vast number of eclectic case designs, vibrant dial finishes, exquisite gemsetting techniques as well as the creative use of colourful stones.

As the oldest fine watchmaking manufacturer still in the hands of its founding families, Audemars Piguet constantly challenges itself to push the boundaries of craftsmanship. And today, we have an excellent lineup of novelties demonstrating this commitment: The latest Audemars Piguet Royal Oak Concept Flying Tourbillon models and Royal Oak Frosted Gold Selfwinding Chronograph models. These new colourful collections, which in total presents six new references for the former and two new versions for the latter, unite contemporary lifestyle, tradition and bold aesthetics which testifies to the Manufacture’s creativity and forward-thinking spirit.

Fast forward to today, the Manufacture presents a small series of six new Royal Oak Concept Flying Tourbillon models in white or pink gold glittering with an array of graded coloured gemstones and diamonds, each offering unexpected and variegated plays of light. Four new models are paved with graded blue sapphires, while the other two feature multicoloured gemstones creating a rainbow effect.

For the two rainbow models, 12 different types of gemstones – including rubies, tsavorites, emeralds, topaz, tanzanites, amethysts and various coloured sapphires – have been meticulously chosen to offer vivid hues and a smooth gradation when combined. Not only do the progressing shades of red, orange, yellow, green, blue and purple bring out the geometry of the case and bezel, they also reflect light in a way that creates a unique optical experience akin to that of a rainbow.

Furthermore, the flying tourbillon itself makes its rotation at 6 o’clock, while the openworked barrel of the hand-wound Calibre 2951 — which is visible at 11 o’clock — gives the wearer a rare glimpse at the coiled mainspring – the watch’s power source. To top it all off, the tourbillon is also set with brilliant-cut gemstones, which is an art in itself for such a small, feather-light component.

The Royal Oak Selfwinding Chronograph is a true classic, having been introduced back in 1997 for the 25th anniversary of the Royal Oak collection. Since its inception, the model has been iterated into numerous variants with different case materials, case sizes, complications and colours.

This year, Audemars Piguet releases two new versions of the Royal Oak Frosted Gold Selfwinding Chronograph, which are equipped with the latest generation chronograph movement – the Calibre 4401 – that allows the wearer to stop, reset and start the chronograph in one simple action. The intricacies of this movement are also visible through a sapphire caseback.

Design-wise, the watch is presented in a choice of 18-carat white or pink gold, and the two 41mm timepieces are respectively complemented with a “Grande Tapisserie” black or blue dial enriched with contrasting counters matching with the case’s colour. The case and bracelet from both the white and pink gold versions are decorated and completed with Frosted Gold, evincing a shimmering sparkle depending on the prevailing light. Based on an ancient Florentine jewellery technique, the Frosted Gold imbues the composition of the whole timepiece with a modern and graceful look.

Both the new Royal Oak Concept Flying Tourbillon and the new Royal Oak Frosted Gold Selfwinding Chronograph bring colourful vibes and astounding aesthetics to the collection. In a way, not just these new models, but the Royal Oak Offshore and Royal Oak Concept collections have offered Audemars Piguet two platforms of experimentation and design innovation since their respective launch. The result is a merger of Haute Horlogerie and Haute Joaillerie, traditional techniques and avant-garde design. In the end, it can be said with confidence that with their unique characters and surprising contrasts, these multifaceted watches are the ultimate statement pieces when worn on the wrist.