The Longines Legend Diver Watch, one of the major entrants in the winged-hourglass brand’s portfolio of diving watches, welcomes a duo of new color schemes.

Longines has long made a name for itself by creating timepieces as well as timing instruments for aviators and various sports. The storied Swiss watch brand also has quite a long history in the realm of diving watches—a history marked by quite a few technical achievements.

This branch in Longines’ history goes all the way back to 1937 with the Longines ref. 4270, which the world’s first Chronograph with patented waterproof push-buttons and a flyback function. e early 1940s then saw the brand create watches for the Royal Navy’s frogmen, followed by the birth of the Longines Nautilus Skin Diver—the first Longines divers’ watch for civilians—in 1958 and so on.

Interestingly, some of these flagship pieces have since been re-issued as part of an “immersion in heritage.” This includes the Longines Legend Diver Watch, released in 2007. An icon of the rich heritage of the winged-hourglass brand, this line has gradually expanded over the years. Some recent and particularly notable iterations of the watch include the one with a black PVD coating which debuted during Baselworld 2018 as well as the vintage-looking Longines Legend Diver Watch Bronze introduced late last year.

And now, for 2021, the Longines Legend Diver welcomes two new versions in steel with blue and brown shades.

As befitting of watches from Longines’ Heritage segment, these two new Legend Diver models propose a competent balance between cutting-edge watchmaking expertise and conserving the spirit of the original design. Case in point for the former would be the box-shaped sapphire glass with several layers of anti-reflective coating, two screw-in crowns and a screw-down case back, as well as a self-winding automatic movement with a silicon balance spring—the Calibre L888.5 (ETA A31.L11)— which is made exclusively for Longines.

Design-wise, the new Longines Legend Diver models have stayed true to the pure lines of the original. As mentioned earlier, the two new colors are blue and brown, which are applied to the lacquered dials with graduated shading. The relatively darker outermost segment of these dials provide a nice contrasting background for the luminous hands, hour markers interspersed with luminescent squares and Arab numerals enhanced with Super-LumiNova rectangles for optimum visibility even in low light conditions. This is, of course, one of the hallmarks of a genuine diver’s watch. A final nod to the original Longines Legend Diver can then be found on the back of the 42mm case: an embossed emblem of a diver. And securing these new models to the wrist are either a brown leather strap or a blue structured leather strap to match the dial color.

If anything, the two newest members of this heritage line certainly expands its appeal among modern gentlemen. Whether you prefer a deep and intense blue or a warmer and more urban brown, whether you need a trusty companion when you plunge under the ocean’s waves or a stylish timepiece for a dive into even the most formal functions, you can’t go wrong with the new Longines Legend Diver. 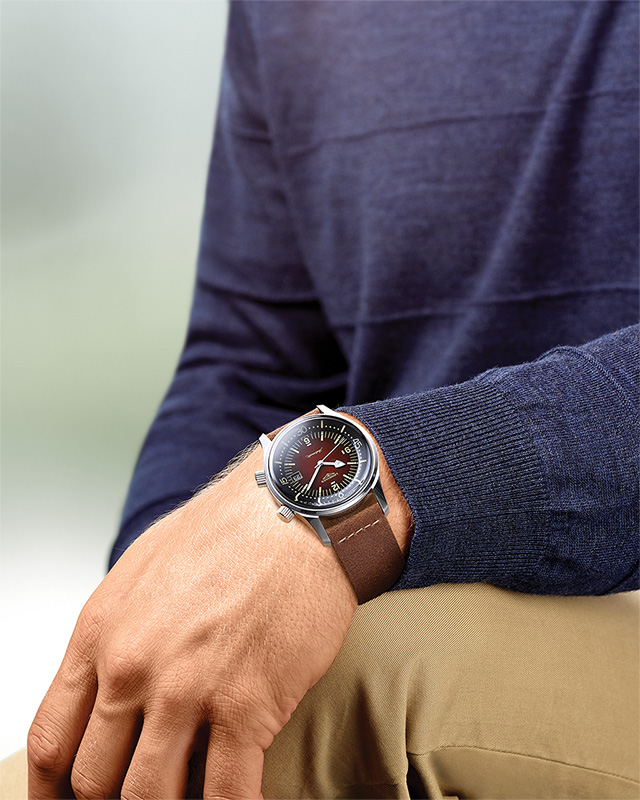