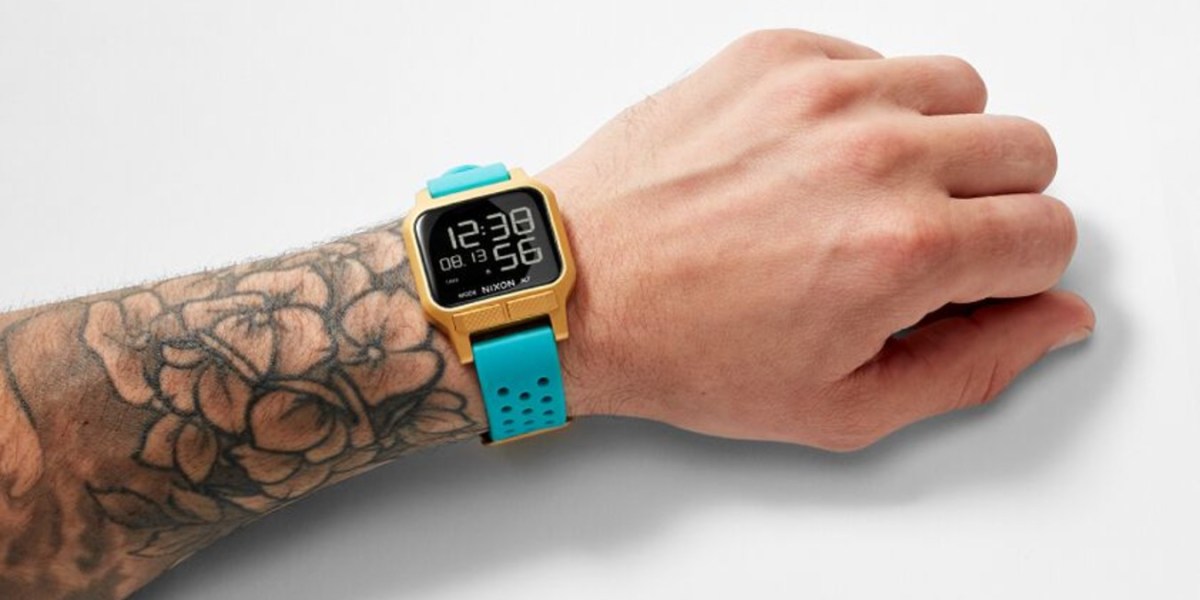 Nixon is taking lead from the Olympics with its new waterproof watch. And there’s no better time to debut, with the recent addition of surfing to the summer games. Already a favorite among pros, this ultra-thin timepiece breaks the mold with its rugged disposition. But Nixon hasn’t shirked on style to keep this timepiece clean and dry. The new Nixon Heat Watch touts itself as the thinnest waterproof digital watch the world has ever seen. Hit the jump to keep reading.

Surfers, skaters, and extreme athletes of other varieties are finally making their mark on the world’s largest stage. And alongside them, Nixon is debuting its latest waterproof wearable. This new Heat Watch features a 38mm LCD dial that measures just 8mm thick. The thinner casing makes it a better fit for high-intensity sports and training so that the added bulk doesn’t throw off players gliding through the water or in air.

Waterproof up to 100-meters, the Nixon Heat Watch is ready to tackle a wide terrain of play. It comes equipped with a calendar function up to the year 2099, alongside a customizable timer. Nixon has thrown in a hopefully encouraging message to athletes pushing to make the most of their 60 seconds. As the final moments approach, the frame will begin to flash red as the word “SEND!” makes its appearance.

Those interested in taking one for a whirl may want to act fast. Only 500 pieces of this Olympics-inspired Team Edition Heat Watch will be produced. Pricing starts at $150, with four colorways available. Our favorite, of course, is the aquamarine and sandy gold combo. Even though the pricing bumps up to $200 here, how can you look at this watch and not dream of hitting those waves running? Those who prefer a more subdued look, however, can enjoy a jet black, military surplus, or plain silver casing instead.

I’ll be honest: I’m hardly the target demographic for this watch. For anyone who loves to surf, olympian or otherwise, the Nixon Heat Watch has a lot to offer. The intense 10ATM waterproofing makes it perfect for just about any level of wave-riding. And as mentioned above, the design is sleek, lightweight, and just screams surfing. So unless we start seeing some serious flooding around my hometown, I likely won’t be dropping the $200 to test it out myself. But Nixon has been providing pro-grade gear for quite some time now, so lovers of the sport are certainly in good hands here.